The DXD series from Brainstorm is designed to ease the transition to IP.

The DXD-8 Universal Clock, a precision multiformat reference generator, generates up to 4 independent video syncs and audio clocks simultaneously. With the PTP option, it acts as a clocking bridge between an IP infrastructure and legacy A/V equipment. 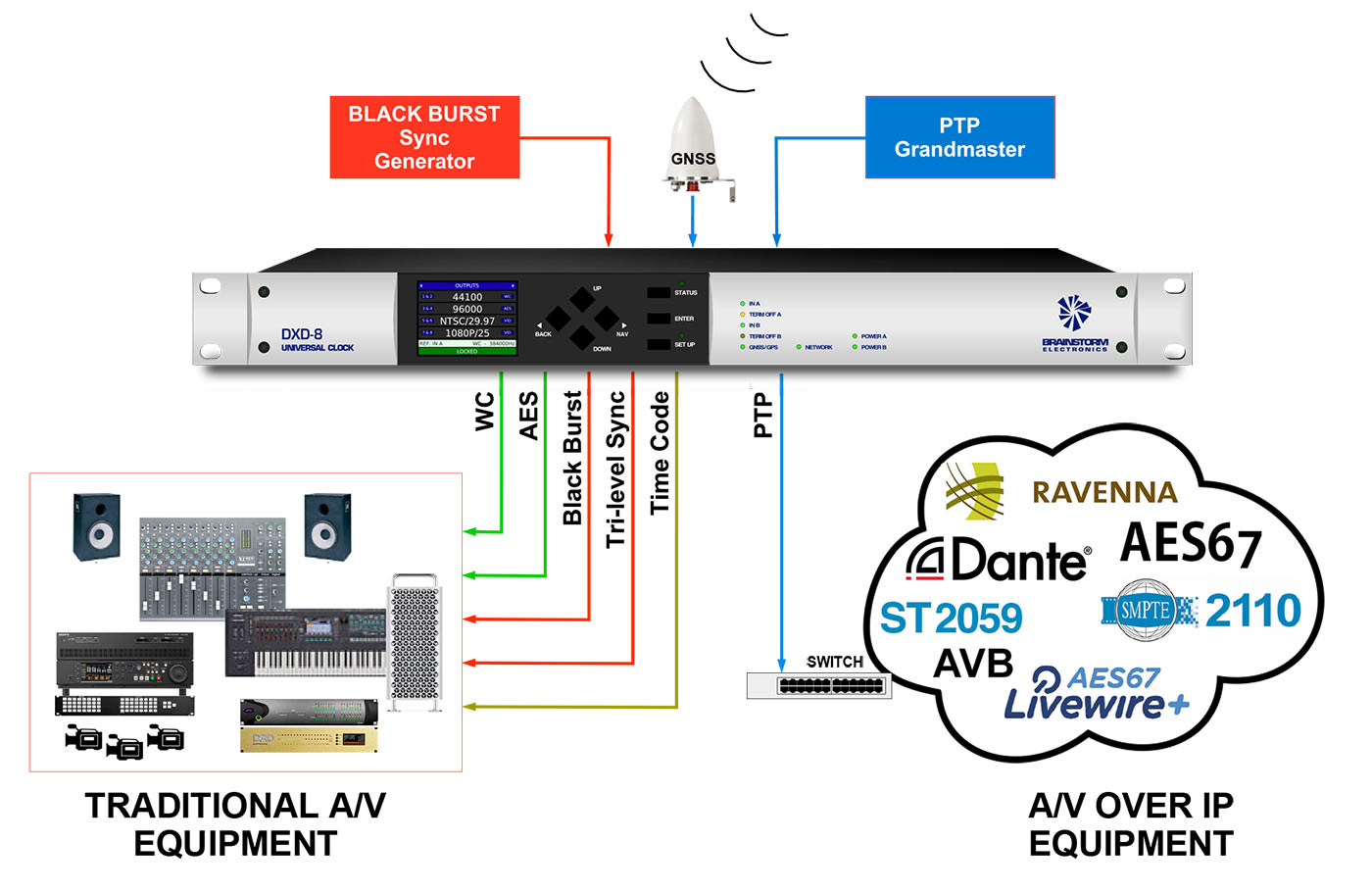 Optional firmware can be installed to give PTP capabilities to the DXD-8, compliant with IEEE 1588 PTP V2 and V1. The DXD- 8 can be either a PTP master or slave Clock. PTP (Precision Time Protocol), defined in IEEE 1588, has been broadly adopted by manufacturers as a network synchronizing standard, which means that the DXD-8 can work in a number of systems. PTP profiles supported by the DXD-8 include AES67 and SMPTE 2059.

As a PTP slave, the DXD-8 would synchronize its internal clocks to the PTP Grandmaster while generating the different sync pulses and clocks. Alternatively it can itself fulfill the function of Grandmaster either locked to the GPS signal (option) or to it’s internal oscillator. The DXD-8 has one Gigabit Ethernet port (RJ45).

Customize Your Units with Universal Outputs

The DXD-8 generates up to 4 independent sync pulses and clocks simultaneously and routes them to the 8 BNC universal outputs. Universal Outputs give the DXD-8 great exibility as they can output any of the generated legacy reference signals. Included are all standard SD and HD video sync formats (Black Burst and HD tri-level sync), word clock and AES11 DARS (standard rates up to 384 KHz and all the necessary pull-up/down, including 24:25 conversions, even VSO) and 10MHz.

A high-accuracy internal crystal oscillator (TCXO) provides a very stable frequency reference (+/- 1ppm). An optional oven-controlled oscillator (OCXO) can be installed. External legacy signals can also be used as reference, such as Word Clock, AES, Video Sync (SD & HD) or a 10MHz tone. The generated outputs have extremely low jitter. The output rates are independent from the reference rate which means that any rate can be extracted from any reference such as 59.97 from 25FPS for example

DXD as a PTP Slave or PTP Grandmaster 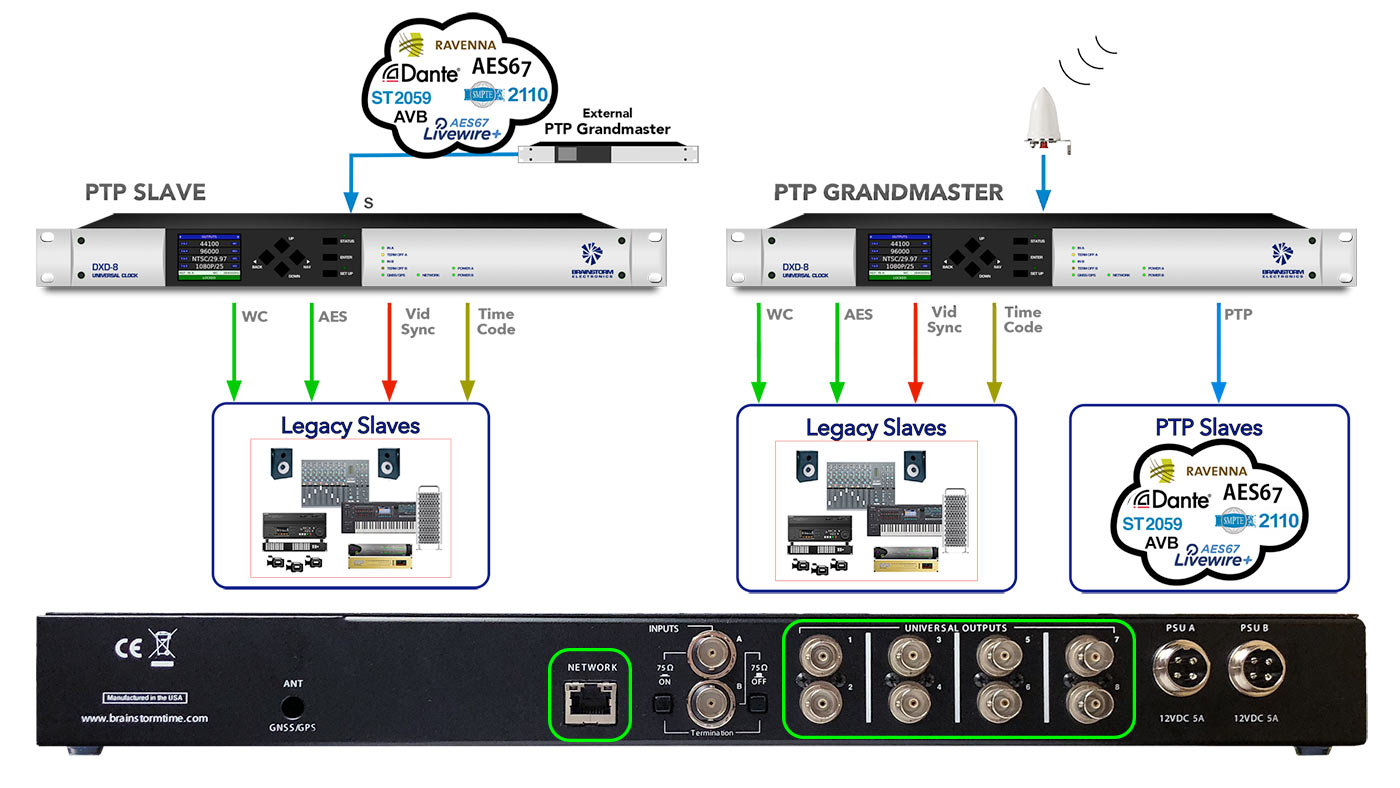 A GPS receiver can be installed in either unit. GPS not only provides an extremely accurate timing source, it also enables DXD’s in remote locations to be locked and in phase with one another. Additionally, with the GPS option, the DXD will have a higher priority as a PTP Grandmaster. 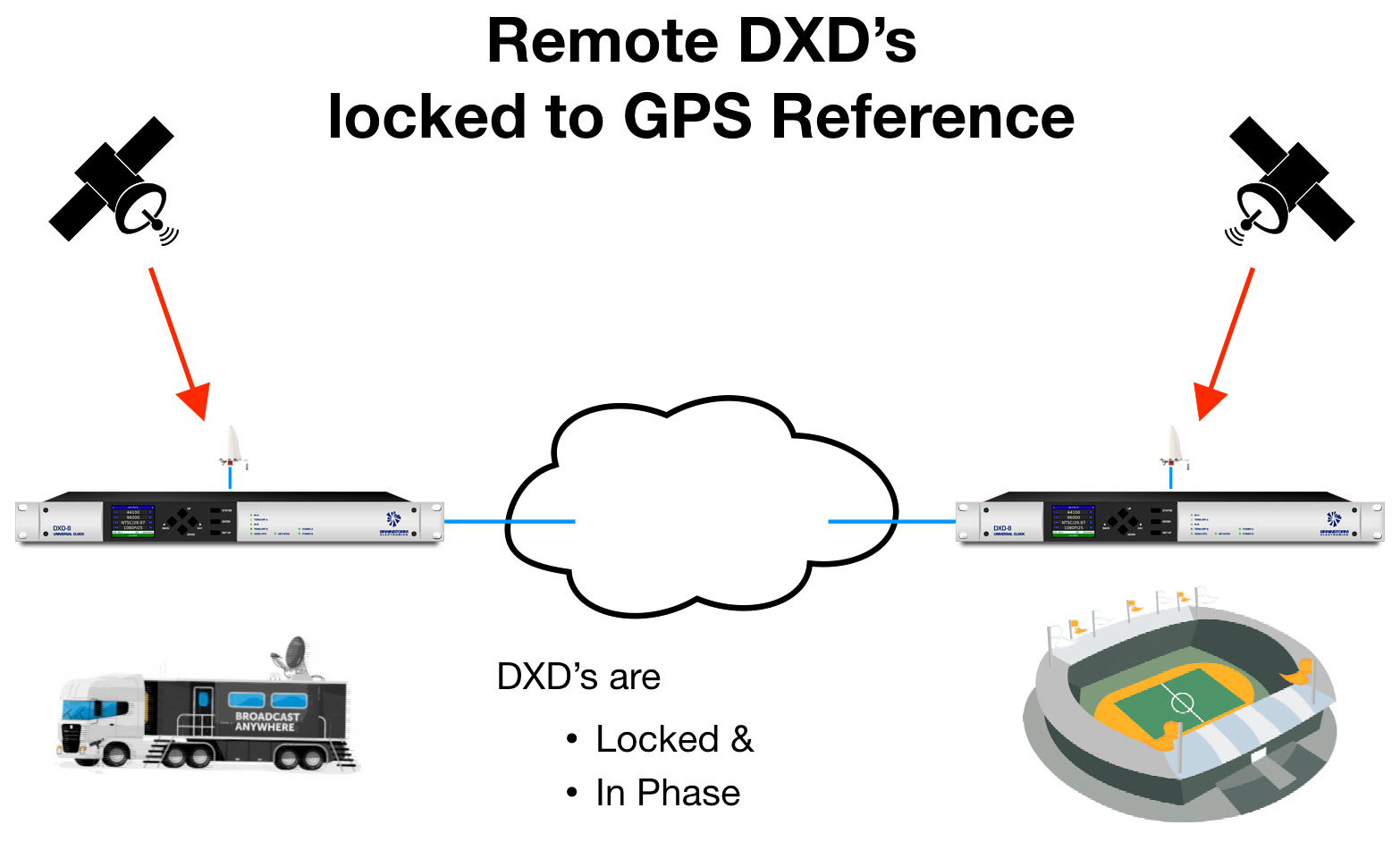 When using an external reference, a second source can be connected as fallback in case of failure. If the external reference becomes unusable, the DXD-8 continues generating, locked either to the alternate source or to the internal oscillator and re-locks to the reference when it reappears. These transitions occur smoothly and gradually with no sync shock to the system.

Two external 12VDC power supply can be connected to the DXD-8. It can operate with either of these power sources and they can both act as a back-up for the other with auto switch-over in the event of a failure. 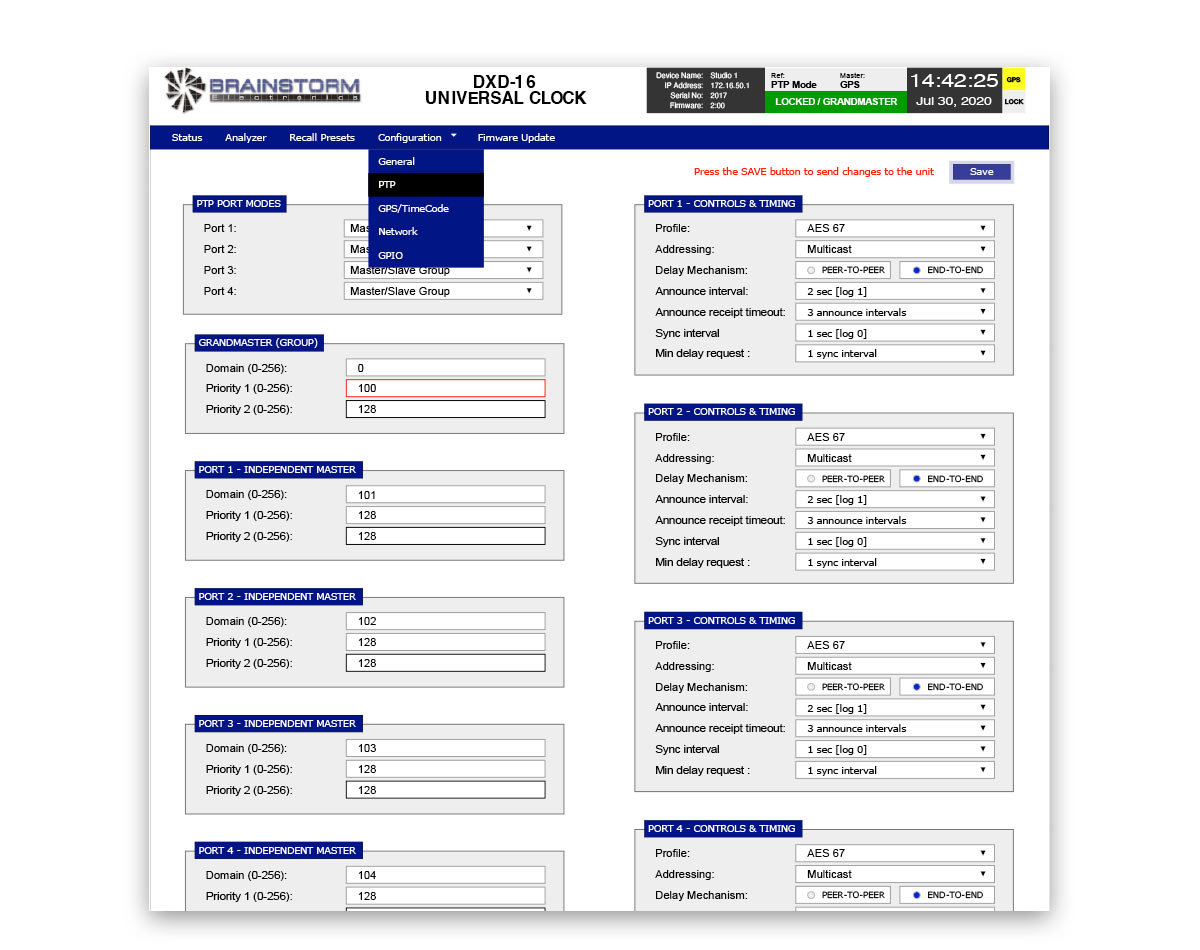 How many different sync signals and rates can the DXD-8 generate simultaneously?

The DXD-8 can generate up to 4 different sync signals similtaneously. These can be WC, AES, Video Sync or 10MHz. They can be routed to any of the 4 pairs of universal output. They can be set to any standard (or non-standard) rate.

Can the DXD-8 be set up to have 8 video sync outputs, 1080p tri-level sync for example?

Yes, the Universal Outputs can be set to any of the formats mentioned in FAQ #1 above, which means that, if 8 outputs of 1080p tri-level sync is what is needed, the DXD-8 can be set up to do just that.